Writer Jessica Ciencin Henriquez, Who Was Once Linked to Armie Hammer, Says Those Leaked DMs Are Real

Writer Jessica Ciencin Henriquez, who was spotted with Armie Hammer back in early September of 2020 just following the news of his split from wife Elizabeth Chambers after 10 years of marriage, is making some a big statement on her Twitter account.

She wrote on her verified Twitter account, “If you are still questioning whether or not those Armie Hammer DMs are real (and they are) maybe you should start questioning why we live in a culture willing to give abusers the benefit of the doubt instead of victims. 🤔 TW// sexual violence,” Before attaching the screen grabs of the tweets. She then added the definition of abuse, “Because some of you made it to adulthood without knowing what this is. Abuse: cruel and violent treatment of a person or animal.” 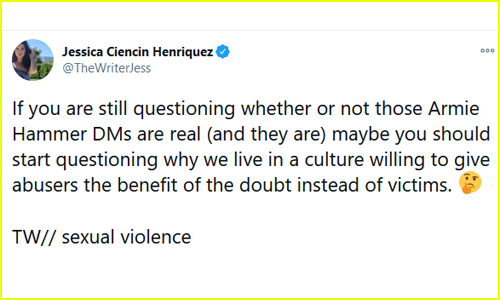 There were some DMs leaked over the weekend and they were allegedly sent by Armie to a woman. The content is graphic and we will not be sharing here.

After Jessica and Armie‘s date in September, she revealed he actually blocked her account.

Click inside to see what else she tweeted about this situation…

Please turn this into a curriculum and teach it in schools.

Read More: Writer Jessica Ciencin Henriquez, Who Was Once Linked to Armie Hammer, Says Those Leaked DMs Are Real
Two more games are canceled, NBA and NBPA to assess protocols
Ben Affleck Teams Up With Disney To Direct 'Keeper Of The Lost Cities' Adaptation