SPOILER ALERT – Do not read ahead if you haven’t finished season one of Bridgerton!

One of the stars of Bridgerton is dishing on one of the biggest twists from the show’s first season.

In the season finale, the identity of Lady Whistledown was revealed, totally shocking fans.

For those who don’t know, Lady Whistledown is a Regency-era Gossip Girl who was spilling all the gossip in her London paper.

Bridgerton is streaming now on Netflix.

If you haven’t read it, check out these spoilers on what season two might be about…

Click inside to find out which Bridgerton character is Lady Whistledown…

Lady Whistledown is really Penelope Featherington, who is played by Nicola Coughlan. 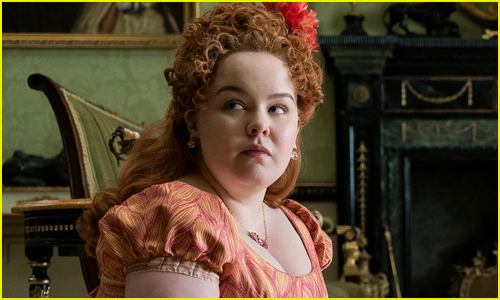 Speaking with Variety, Nicola revealed just how she found out Penelope was Whistledown – and it wasn’t from reading the books.

“When I went for the first audition, I only had a couple of days to prepare; I didn’t have time to read the books or do anything like that. I just thought, ‘I’ll give this a go and if I get a second call, then I’ll read everything,’” Nicola shared. “But that didn’t happen, I just got the job.”

She adds that she had to catch up real quick with the series that took over Netflix during the holidays.

While she did pick up the novel series from Julia Quinn, Nicola also “went to a lot of the fan forums online, because these books have been out for 20 years.”

“People adore them and have such a connection to them. Penelope is really close to their hearts. It was on a forum that I realized she was Lady Whistledown. When I saw it, I thought, ‘No, no, no, no, that can’t be right.’”

Nicola continued, “I kept re-reading it, because it didn’t make sense: [I’m] being given this amazing role in a Shondaland-Netflix show, and it’s that role. It’s quite mind-blowing.”

She also spoke about that super secret ending scene for her reveal as Lady Whistledown.

Bridgerton is streaming now on Netflix.

If you haven’t read it, check out these spoilers on what season two might be about…

Read More: The Actress Who Really Plays Lady Whistledown on ‘Bridgerton’ Reveals How She Learned That Big Spoiler
Alex Morgan Reveals She & Her Family Contracted Coronavirus Over the Holidays
Emma Roberts And Garrett Hedlund Are Reportedly Very Selective With The People They Let Visit Their Newborn!