Taylor Dayne is being slammed by fans after appearing at Trump‘s New Year’s Eve party at the Mar-a-Lago resort in Florida.

The President of the United States was expected to host the event, but he decided to go back to Washington, D.C. just hours before the party was set to begin.

Many members of the Trump family and the president’s lawyer Rudy Giuliani did attend the party, which also featured Dayne and rapper Vanilla Ice.

“2020 kicking me in the balls again one last time with @taylordayne being a dirty sell out. Never could I have imagined,” Broadway actor Marty Thomas tweeted. Author Josh Sabarra replied with the crying face emoji, “And I had always been such a #TaylorDayne fan… ”

With many typos, Taylor tweeted, “I’m saddened by all this. I have a 30 yr careers s that many diverse friendships .and I try to stay non political and non judgmental and not preach . I sing from my heart purely and from Source. I wish for all to be who they need to be .. and find their way.”

Taylor just competed on the most recent season of The Masked Singer. 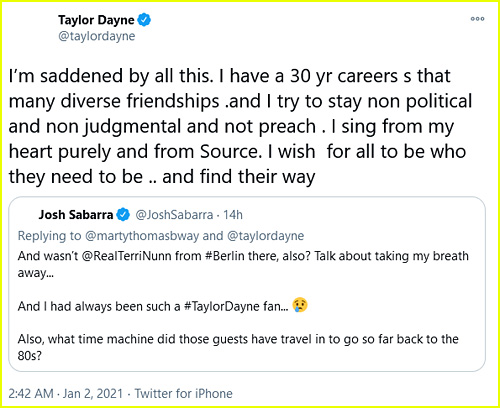 Read More: Taylor Dayne Responds After Being Slammed for Being at Trump’s NYE Party
Dua Lipa Goes For a Dip at the Beach in Mexico
Mare Is A Puzzle Adventure Headed To Oculus Quest Rather Soon