The 29-year-old Divergent actress confirmed the news during an interview on The Tonight Show Starring Jimmy Fallon, which is airing on Monday (February 22).

The reports of the engagement surfaced after Aaron said he has a “fiancee” during an NFL Honors acceptance speech a couple weeks ago. The speech happened just days after we learned that he was dating Shailene, so everyone assumed she was the mystery fiancee.

“I’ve been reading that too, which is kind of funny… yes, we are engaged. But for us, it’s not new news. Everybody right now is freaking out over it, but we’re like, ‘Oh, we’ve been engaged for a while,’” she said. “Yeah, we got engaged a while ago and he’s first off a wonderful, incredible human being. But I never thought I’d be engaged with somebody who threw balls for a living. Like, I never thought as a little girl, I was like, ‘Yeah, when I grow up, I’m gonna marry someone who throws balls! Yeah!’ But he’s really just so good at it.” 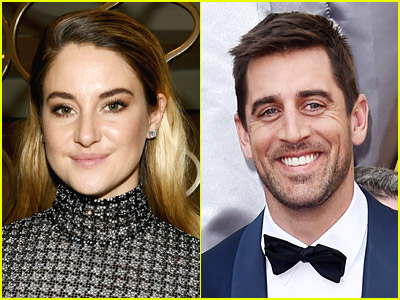 Shailene talked about how her dog loves Aaron.

She said, “When I first met him, I think my dog like pulled me aside and was like, ‘If you don’t date this dude, I will disown you as my mother, because the three feet that I run with you when you throw a ball is nothing compared to the marathon I’m able to run with him.’”

Despite being engaged to one of the best football players alive, Shailene still has not been to one of his games as they only started dating during the pandemic.

“We met during this whacky, whacky time and all the stadiums were closed that he was playing in, so I have yet to go to a football game,” Shailene said. “I didn’t really grow up with sports, especially American sports. It was never really on my radar. When we met, also, I knew he was a football guy, but I didn’t know like what kind of a football guy he was. And I’m still constantly learning.”

Shailene doesn’t seem to understand the love for the game just yet.

“I don’t get it. He’s good. He’s great. But, like, I don’t understand. ‘Cause I don’t know him as a football guy. I know him as, like, the nerd who wants to host Jeopardy!. That’s the dude I know,” she said.

Rumors swirled that this Oscar-winning actress introduced the couple, but she just spoke out to deny the reports.