There has been some drama between Kim Cattrall and Sarah Jessica Parker over the years, and amid the news that Sex and the City is returning for a reboot on HBO Max with SJP, Kristin Davis and Cynthia Nixon returning, fans had some comments.

Some backstory: In 2017, Kim revealed that she was never friends with her co-stars and the relationships on set felt “toxic.” She also revealed she wouldn’t do a third film with them. Then, months later in early 2018, Kim‘s brother suddenly passed away and Sarah Jessica wrote a comment on Kim‘s Instagram post, expressing her condolences and seemingly, mending their broken relationship. Later on, Kim suddenly lashed out at SJP for “exploiting” her family’s tragedy. Kim was rumored to be the reason why a third Sex and the City movie never came to fruition.

On Sunday night (January 10), SJP and her co-stars celebrated the news that the show would be returning. One fan commented, “She didn’t tag [Kim‘s character] Samantha Jones.” Another then responded, “they dislike each other.” 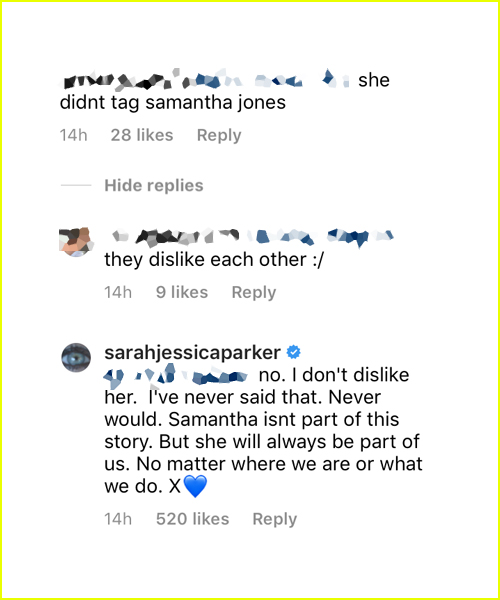 SJP said in response, “No. I don’t dislike her. I’ve never said that. Never would. Samantha isn’t part of this story. But she will always be part of us. No matter where we are or what we do. X.”