Jen Shah is speaking out for the first time following her arrest.

Earlier this week, the 47-year-old Real Housewives of Salt Lake City star was arrested on federal charges of conspiracy to commit wire fraud and money laundering in an alleged telemarketing scam. Her assistant Stuart Smith, who also appears on the show, was also indicted and arrested, pleading not guilty as well.

Two days later, Jen pleaded not guilty to the charges and the judge ruled she must sign a $1 million personal recognizance bond secured by $250,000 in cash or property and have the signatures of two “financially responsible persons” for her continued release.

Now, Jen is breaking her silence on the arrest and has released a brief statement on her Instagram Story.

Click inside to find out what Jen Shah wrote…

On Saturday (April 3), Jen re-shared a “Free Jen” meme that a fan posted on Instagram. Along with the meme, Jen also shared a quick message thanking fans for their support.

“Thank you for being loyal, believing in me and not believing the hype,” Jen wrote. “This journey has showed me who my true friends are. All my love #ShahSquad.”

Production on season two of Real Housewives of Salt Lake City has continued without her. It was recently revealed that Bravo cameras were rolling when Jen Shah was arrested. 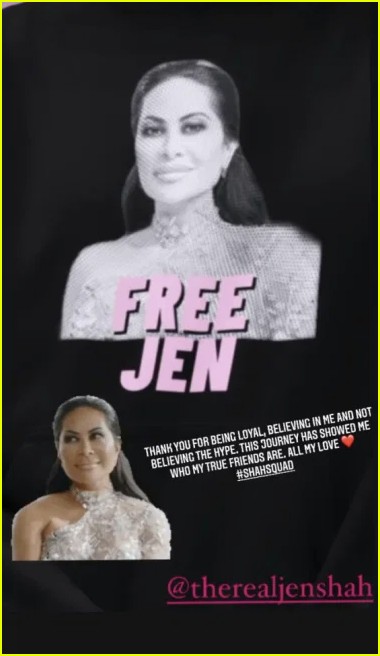