Megan Fox is speaking out after a fake post, which was attributed to her, went viral on social media.

The fake post included a statement, written from Megan‘s perspective, that explained why she wasn’t wearing a mask in some photos with fans.

“I noticed comments on social media questioning my decision to ‘not wear a mask’ in public. While I appreciate the concern of my fans and others, it is ultimately my decision to trust the universe to keep me and my family safe. We are okay. The fans I met did not have any issues and if they did, I would have gladly given them space or put one on since I always carry one with me for the comfort of other people. Ultimately, I do not think bullying is the way to go about this. Please respect our beliefs, values, privacy,” the fake statement read.

Fans noticed that the Instagram screenshot actually included the caption and likes from a different post. Someone edited out the photo from that post and added the fake statement into it.

Megan went on her Instagram Stories on Friday night (February 19) and responded to the controversy.

“I’ve never made any statement regarding wearing masks,” Megan said. “Scary that you can go viral and possibly be socially crucified for something you haven’t done. The internet is so FUN.”

Brian Austin Green‘s new girlfriend is speaking out about how he co-parents with Megan. 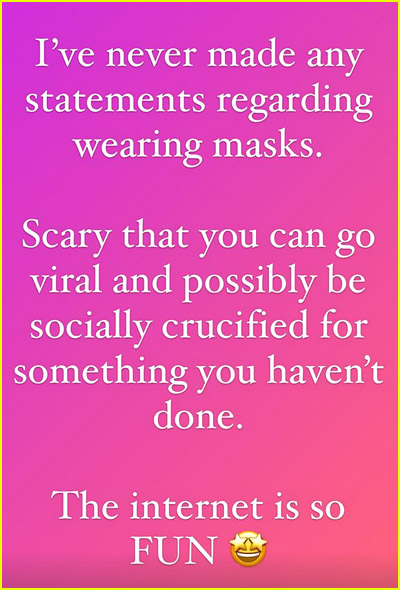 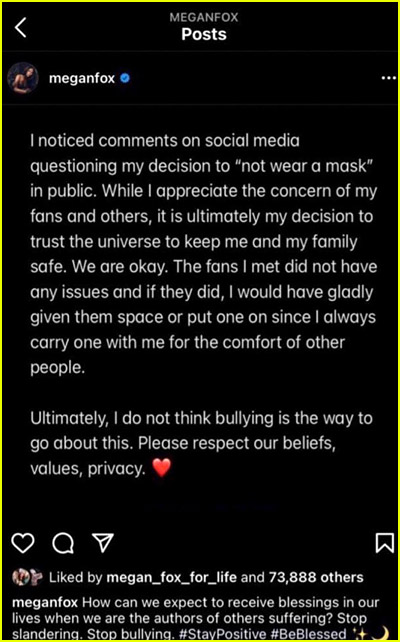