Is The Urban Riding Club in Netflix’s ‘Concrete Cowboy’ Real?

In it, Idris Elba and Caleb McLaughlin star as father and estranged son, whose bond is strengthened by being part of an urban riding club based out of Philadelphia.

The movie also shows that the son finds out that the city is planning to close the stables.

But is the club and land actually real? Are there real Black Americans riding on horseback in Philadelphia? 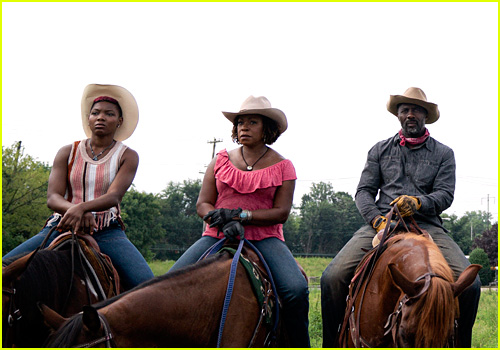 The Answer is Yes!

While the film is actually inspired by a fiction book called “Ghetto Cowboy” from G. Neri (which was in turn inspired by a profile about young Black cowboys in LIFE magazine), the riding club is very real.

Philadelphia’s Fletcher Street Urban Riding Club was one of the clubs who were profiled in the LIFE article and their land, which is featured in the film, is currently at risk of being taken away from them, and their horses, too.

Ellis Ferrell, who founded the club in the 1940s as a boy, began it by renting and riding horses on the streets. In the 1980s, he opened a stable with just about five horses on the corner of 31st and Master Street, and he hoped to use the horses to teach life lessons and discipline to youth in the city, while also lifting the kids’ spirits.

The lot across the street from the stable is planned for a housing complex by the city, as the Philadelphia Housing Authority bought it for just $1 from the city. The lot never officially belonged to the club, but has been used by them to graze and ride horses.

At the moment, the club’s location is unclear and there is a GoFundMe page to raise money for a new location and more.

You can watch the official trailer on JustJared here.