Olivia Rodrigo‘s new song “Driver’s License” has become a smash hit success this weekend and a lot of people are trying to figure out who the song is actually about.

If you didn’t know, the 17-year-old actress stars on the Disney+ television show High School Musical: The Musical: The Series and fans believe there was something going on between her and co-star Joshua Bassett.

The two young stars played high school students who got the roles of Gabriella and Troy in their school’s production of High School Musical.

Joshua, 20, is currently in a relationship with fellow Disney star Sabrina Carpenter, 21, and fans believe that Olivia wrote the song about them. (See photos of the couple together here)

Click inside to read details from lyrics of the song… 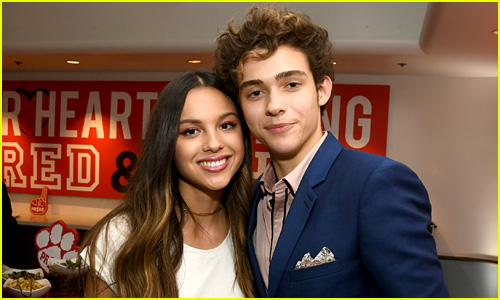 “And you’re probably with that blonde girl / Who always made me doubt / She’s so much older than me / She’s everything I’m insecure about,” Olivia sings on the track.

Sabrina is obviously a blonde and she’s several years older than Olivia. The original lyrics of the song actually were about “that brunette girl” and they were changed to “blonde” for the official version.

“Guess you didn’t mean what you wrote in that song about me,” Olivia also sings in the song.

Joshua released a song called “Anyone Else” back in summer 2020. He has said that the song was written after realizing “that I was hopelessly falling in love with a close friend … who was in a relationship with someone else.”

While fans are coming up with theories about the song, Joshua has actually been supportive of Olivia and the release. He posted the below message on his Instagram Stories.

i’m not even an olivia rodrigo fan but her nEW SONG???? joshua basket or whatever ur name is how dare u hurt her like that wtf