Eiza Gonzalez Slams Comment That She Calls the Paparazzi

Eiza Gonzalez is speaking out in response to a comment from a troll who accused her of calling the paparazzi to take photos of her.

The 31-year-old I Care A Lot actress was spotted looking chic in a green dress while arriving for an interview on Jimmy Kimmel Live on Tuesday (February 16). We shared a photo on our Instagram account and someone left a comment saying, “Guess who called the paparazzi? 🙊😜.”

For those that regularly read our site, you’ll know that there always are photographers outside of the Jimmy Kimmel Live studio for every show. She obviously didn’t call them on her own.

“”Hi Hinda. Reading the sarcasm of your message I felt the need to answer your question. I’ve never in my ENTIRE career called or ‘tipped off’ a paparazzi. To the point that I would encourage any paparazzi to come forward and prove that I have if such thing has been done. I’ve nothing to worry about,” Eiza said in her response.

She continued, “I’d encourage you not to believe everything you reading in gossip sites. What they’re intention is, is to sell. At all costs. I like to live my life private as possible. For the rest of my life. I’m unsure you know this, but paparazzi make a living out of pictures. Hence why they park outside our homes and follow us until they get a shot. Again. Got nothing to hide. But I won’t let you or anyone slander me by something that was made up by a gossip site to victimize they’re favorite male and villainize a woman who has been working non stop since I was a child for a juicier narrative. I don’t need no man or photos to give me a career. I’ve worked pretty hard to be where I am. Wishing you the best this Thursday!”

Eiza gives an incredible performance in the new Netflix movie I Care a Lot, which comes out on Friday! 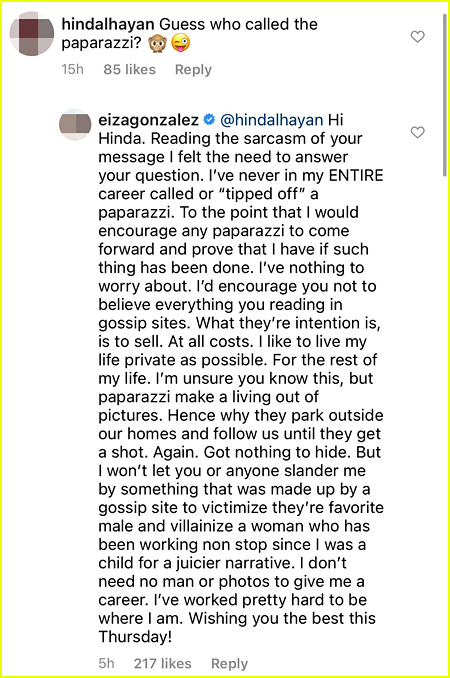