Olivia Rodrigo got her driver’s license…and she’s already gotten in trouble, too!

The 18-year-old High School Musical: The Series star and “Drivers License” hit-maker revealed she received a parking ticket on her Instagram Story on Sunday (April 11).

“damn this driving s–t isn’t all fun and games,” she captioned a photo of herself holding a City of Los Angeles parking violation. 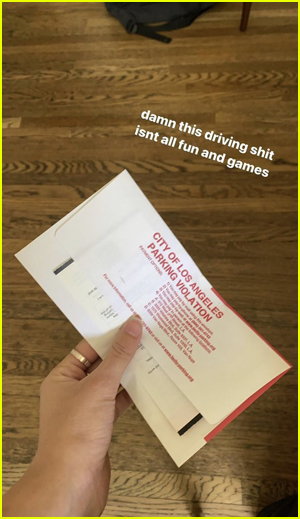 Her hit song was originally released on January 8, and is now the 10th song in history to have debuted at No. 1 on the Hot 100. It’s also the first time that happened for a female artist’s debut song as a solo act.

“The success of ‘Driver’s License’ has been a huge lesson in how you just need to, when you put a song out, you just need to let it go. And it’s everyone else’s song to interpret, it’s not your song anymore,” she revealed.

Following the record-breaking success of “Drivers License,” Olivia released her follow-up “Deja Vu” earlier this month. Find out what the song is all about!

If you didn’t see it, a superstar recently called upon Olivia Rodrigo to help promote an upcoming record in a cute way. Check it out!