During the cute interview, the former Charlie’s Angels co-stars revealed that they call each other “Poo Poo” and will even use the nickname while out for dinner in public.

Drew said that she doesn’t like sleeping in a bed with anyone other than a romantic partner, but she’ll let Cameron sleep with her.

“I don’t like co-sleeping with anyone, it’s a thing,” Drew said. “I don’t know why but it’s my thing. If it’s like a lover then obviously that’s different, but no friends. I will sleep in a bathtub, I’ve slept on a pool table, like you name it, but this one, oh my gosh. We’ve lived together for periods of time, been roommates. I’ve slept in a tent while my fever was breaking on a Chilean mountain in a thunderstorm in, like, Patagonia. I mean, yeah, we’ve been everywhere together.” 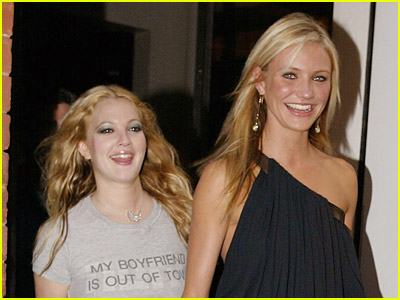 When fellow guest Savannah Guthrie said that fans want a Charlie’s Angels reunion Drew said, “I’m glad that people feel that way. I’ll be grannies in inner tubes with Poo Poo, so we can do anything and everything as long as we’re together. I have a whole life to live with you.”

Cameron then said the sweetest things about their friendship.

“Truly one of the great joys of my life is our friendship,” Cameron said. “When I think about you, literally I will cry, because I just think you’re so special and to celebrate you every year, it’s one of my favorite times of the year.”

Drew responded, “You’ve made me a better person my whole life. And you’ve seen me through everything. Ugly, beautiful, loss, life, birth.”

Drew burst into tears when another big star showed up to celebrate her birthday!

Watch the full interview below!