Armie Hammer is currently a trending topic on Twitter after Instagram DMs that he allegedly sent to a woman have surfaced online.

The direct messages have not been verified and some people have been saying that they appear to be fake, though it’s not clear right now what is real and what is not. There is a screenshot from the person who originally posted the alleged DMs saying that they are fake, but some are saying that this screenshot isn’t real either. 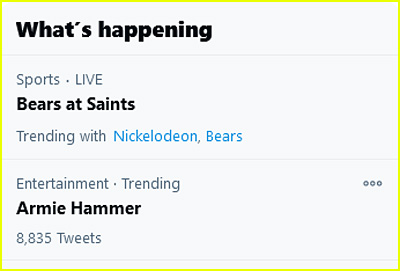 While we won’t be sharing the alleged DMs, there is one line from them that seems to be going viral right now. It’s alleged that he said “I am 100% a cannibal” to the woman who shared the messages. Now, many people are commenting on that detail.

Armie split from wife Elizabeth Chambers back in July 2020 and he recently traveled to the Cayman Islands, where she has been living with their two kids, to reunite with them.

Read what people are tweeting below.

ok hear me out. is armie hammer a vampire?

In other news, I’ve decided that Armie Hammer has killed before and will do it again.

We didn’t start the fire

me checking in on the armie hammer news pic.twitter.com/HZY43XOo0t