Amanda Seyfried made it known this week that she wants to play Glinda in the upcoming Wicked movie and she gave a few choices for her Elphaba.

The 35-year-old actress, who previously starred in such movie musicals as Mamma Mia and Les Miserables, suggested actresses like Anna Kendrick, Anne Hathaway, and Samantha Barks for the other lead role.

Anna was told about the comments during a new interview with E! News and she reacted to Amanda‘s suggestion that she should play Elphaba.

Turns out, Amanda has brought up the idea to Anna before! 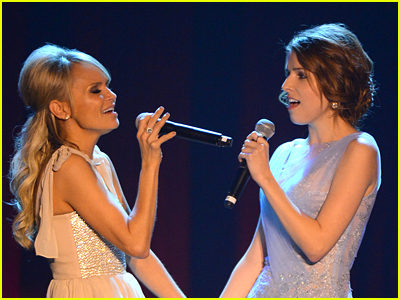 “That’s so funny,” she told E! News. “I hadn’t heard that, but I, when I met her in real life, she said that to me. So I was like, what are you, eavesdropping on that conversation? I didn’t know that she’d said that.” She jokingly added, “So she didn’t just say it to my face to be nice.”

Anna was asked if she’d be interested in accepting the role.

She said, “Oh, these questions are always tricky to answer, to not create a thing. I mean, obviously like, Wicked is a masterpiece and a classic and it’s an iconic show and that’s all I’ll say about that.”

Kristin Chenoweth, the original Glinda on Broadway, has already revealed who she thinks should play the roles. She previously performed “For Good” with Anna at a benefit concert in 2012. Watch below!