Ireland Baldwin came to her step mother Hilaria Baldwin‘s defense amid the controversy surrounding her heritage and her accent.

If you don’t know, Hilaria has been accused of faking an accent and pretending she is from Spain, when she was born in Boston, Massachusetts. Hilaria herself has issued a response to this controversy, saying, “I was born in Boston and grew up spending time with my family between Massachusetts and Spain. My parents and sibling live in Spain and I chose to live here, in the USA. We celebrate both cultures in our home—Alec and I are raising our children bilingual, just as I was raised. This is very important to me. I understand that my story is a little different, but it is mine, and I’m very proud of it.”

One moment keeps popping up online that has everyone talking and this is the infamous “cucumber” moment. In a clip from a cooking segment on the Today show years and years ago, Hilaria suggested that she forgot the English word for “cucumber.” You can watch the clip here.

Ireland, who had already defended her stepmother in a series of videos, took to the comments section of Hilaria‘s personal Instagram to issue some responses to the controversy. One of the comments referenced the infamous cucumber moment.

Click inside to see what Ireland Baldwin said about the cucumber moment, and click through the gallery to see everything Ireland had to say in response to the controversy… 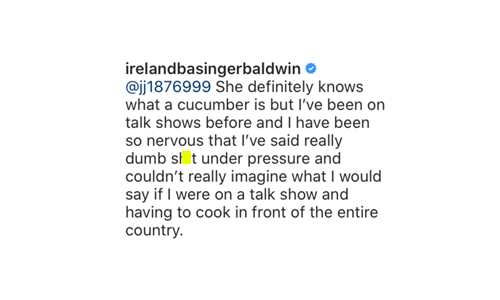